Rambling Thoughts of the Post-Avant

So what does it mean to be 'non-mainstream' in this age? Having recently seen the extraoridinary Ursonate performed in a dank basement in Bury, a 'sound-poem' in sonata form (roughly) first performed in 1930's Germany, it's hard to think that there's any point in the term avant garde anymore. Ron Silliman, of course, has, along with others such as the late Reginald Sheppard, coined the term Post-Avant for what comes 'after the avant garde.'

Everything has been done before, at least in terms of shocking audiences and provoking the reaction, "but that's not poetry/art/music/etc..." in an audience used to the familiar shapes of poetry before modernism came along. These days, most readers don't expect poetry to always rhyme; nor do they always expect it to 'make sense' in the way it used to do, supposedly, in some mythical golden age of simple lyric poetry.

There are still people who get shocked by sound poetry and concrete poetry; but I suspect there's much less than there used to be of shocked responses. These days, people who like it like it, and those who don't get bored by it, except possibly in the fulminating backwaters of the odd Neo-Formalist magazine, still fighting battles that everyone else got exhausted by long ago.

There are still people around who remember the so-called Poetry Wars at the Poetry Society of the late '70's; and the fact is that a lot of really interesting writers went into the wilderness for a good few years, only emerging years later with egos and reputations still bruised. Most young writers, I suspect, look on it all with some bewilderment.

That 'experimental writing' still survives, and is being practised by young writers fresh out of university, is a sign of health for the whole of the writing community. But it's no good pretending that we're any kind of avant garde. Even the 'flarf' and 'conceptual' schools of poetry are only going places that somebody has been before: flarf is a form of collage and conceptual art has been around since the '60's.

What marks out the 'non-mainstream' from the 'mainstream' then? Well, to be honest, it's partly a tribal allegiance, isn't it? Going to The Other Room, I hear plenty of snide remarks about Duffy and Armitage, and I'm as guilty as many in making the same remarks about Andrew Motion. The fact that I don't at all find his poems interesting or engaging is not really his fault though. That he's more likely to be reviewed by the Guardian than, say, Robert Shepherd or Maggie O'Sullivan says something about the values of the mainstream; but it does get dull to be always harping on about it.

There are still, I think, two basic approaches to writing: one is the direct, denotative, logical, descriptive route which is largely the approach of the mainstream; the other is associative, fractured, disruptive, illogical, indirect route favoured by the non-mainstream. Both can produce great writing, and bad; and we all have out preferences for one over the other. Then again, the direct route is not always as direct as it seems, and the indirect isn't always as indirect as it seems: or, you tak the low road and I'll tak the high road, and I'll be in Scotland afore ye. But we're both getting to Scotland, as it were.
Posted by Steven Waling at 3:44 PM 2 comments: 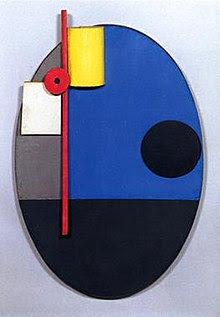 The final event of the text festival was all to do with Kurt Schwitters. First, there was a seminar in which people who had performed or responded to his sound-poem Ursonate talked about it, and we saw pictures of the Merzbarn in Ambleside, one of his last remarkable works. I learned something that I had never known about Bury: that for a short time, Schwitters had been interned in Bury at an old mill called Warth Mill, as an enemy alien, before going off to the Isle of Man where many European artists, thinkers and writers were sent before the British Government recognised that they weren't Nazi spies.

This strange connection of Bury to European art and the Entarte Kunst (Degenerate Art) that Hitler was so against made for a remarkable performance of the whole of the Ursonate in the basement of this mill. It was dark: there were candles, one anglepoise lamp and the light from mobile phones to illuminate the text for the four readers. We were inside a space with plaster peeling from old red-brick walls, lots of bare central heating pipes and a picture of the man himself at th front.

And what a remarkable piece it is: full of rolling 'r's', labial 'l's', 'k's' and in amongst this the structure of a sonata, including a rondo, a scherzo, a beautiful largo and a cadenza. The readers included Christian Bok, himself a remarkable experimental poet whose pieces in the Text Festival include a poem programmed into the DNA of a bacillus, and Jaap Blonk, himself a sound poet and musician of considerable achievement.

I left the dark of that room into the brilliant sun shining onto the tarmac a very ordinary industrial estate in a very ordinay part of a very ordinary town in North East Lancashire, reflecting on connections. The connection between Bury and international modernism, as seen both in this performance and in the text festival itself, is all the more remarkable for being so unexpected. It's almost like one of Kurt Schwitter's Merz collages: ordinary materials transformed into the extraordinary. Which is how one of the participants of the Schwitters seminar described as the purpose of art: to take bits of the world, treat it and return it back to the world transformed.
Posted by Steven Waling at 11:25 AM No comments:

Quite an amazing few days on the whole. First, there was a trip to the very baroque old city of Bruges, with its churches oppressively over-decorated on the inside but quite restrained outside, with its strange fountain of a man's head with two snakes coming out of his mouth. No doubt symbolic of something or refering to one of the more bizarre Greek myths. Then there was the chocolate, which is all gone now; but I've still got the nice tin box it came in.

No chance of pretending that I wasn't being terribly touristy, I'm afraid. I was not being all superior and pretending I was travelling. I went into the ferry's piano bar and joined in the singing of Billy Joel songs and even requested some Sondheim.

That was Tuesday to Thursday taken care of. What to do about the Royal Wedding? Well, I did a very good job of ignoring it, instead. Went to the park and watched ducks. Ate an icecream.

But the highlight has to have been the Text Festival, which was a remarkable event. First, the exhibition has lots of interesting things in it: and is spread across three sites. Phil Davenport's piece in the Transport Museum was very good, and I loved the way that one had to search there for these text pieces among the horse-drawn trams, buses, lorries and other transport paraphernalia. A wall full of old station signs seemed almost to be a kind of poem in itself; and the small postcards from arthur + martha were very moving in a way that there work with often marginalised people often is, because they use those peoples' actual words.

The first performance in Bury Art Gallery at 11pm was very good; with the highlight being a wonderful mix of sound and text poetry from Helen White & Moniek Darge; Márton Koppány and Marco Giovenale were also very good. Of the pieces in the exhibition, I really liked Tony Lopez's piece; but there were many highlights. Even some of the small works were interesting.

At 4pm we all traipsed into the Parish Church, which was a very strange venue for a reading of avant garde poetry but somehow seemed to work. Phil Minton's Bury Feral Choir was the first act, who filled the hall with some at times very unspiritual sounds, included laughter, what sounded like the chatter of a lot of old women, long o's and um's and all kinds of sounds. Somehow, in that setting, it did seem to sound spiritual, which makes one wonder about the meaning of place in the work. Then Satu Kaikkonen & Karri Kokko from Finland filled the space with the sounds of the Finnish language. Because there was no translation, there was no way of telling if there poems had a meaning, but the sounds and their performances were both beautiful. Finally, we had Ron Silliman. I don't really know his work as much as perhaps I should, but then it's always seemed a rather daunting read. He read an extract from Northern Soul, a poem he started at the last Bury Text Festival; and I rather revised my opinion having heard his voice. His neon piece in the exhibition is not the highlight, and isolated sounds a bit patronising ("Poetry has been bury, bury good to me")
but in the context of the larger piece, which meanders from Bury to America in a very entertaining way, it doesn't seem so.

I shall be back to this blog later to finish off the account of the Festival, but the last event deserves a blog all to itself: the remarkable Ursonate by Kurt Schwitters.
Posted by Steven Waling at 10:49 AM No comments: