feels rather dated/follow your nose

A little comment on this rather intriguing phrase of Matt's in his generous review of my reading at The Other Room (I personally don't think I was as good as I know I can be - a combination of bad light and the daunting prospect of reading to my first ever totally non-mainstream audience.)

I understand what he means with regard to the pop-cultural references - but than I was brought up with pop music and the like, so that's probably inevitable! I'm 51 you know! (using my best old man voice there!)

Talking sometimes to non-mainstream poets around Manchester, I sometimes get the feeling there's a mutual incomprehension thing going on. After one reading at the Whitworth, one chap asked why do people bother with their little anecdotal poems about animals and aunts and the like. Well, presumably they bother because they enjoy it. Otherwise they would go and do something else. And sometimes I catch myself enjoying it for what it is, rather than what I think it ought to be.

If you spent your time worrying if what you do is "up to date" I think you'd very soon give yourself a hernia. You follow your nose. I think I personally at the moment I'm following my nose in two ways: in one direction, it's all found text and (no longer involving scissors) a kind of cut-n-paste disruptiveness. In another, it's a kind of urban lyricism/wandering through life astonishment at the beauty of it all kind of thing. Some of my poems aren't so much written as assembled.

I listen to a lot of jazz and I think it sort of affects the way I write. I improvise poetry into shapes that seem pleasing to me. It's probably been done before, by someone else, somewhere in the world of poetry. But non-mainstream poetry is not a set of tick-boxes, or novel just for the sake of being novel. If it is new, then the newness is earned, and probably happens not because the poet has been self-consciously trying to be different. It happens because the poet is following his/her nose.
Posted by Steven Waling at 11:08 AM 1 comment:

I recently gave a reading at The Other Room. This was Matt Dalby's review of my performance:

Despite snow there were around thirty people at The Old Abbey Inn for the latest
Other Room reading on Wednesday. The readers were Steven Waling, Holly Pester
and Rob Holloway. To be honest I found my attention wandering a lot throughout
the evening so my account will be pretty unreliable. That wasn't the poets'
fault, it's just been a hazy kind of a week, but it may have contributed to some
of the misgivings I had that will become apparent.Steven Waling opened with
poems drawn from Travelator and Captured Yes as well as other more recent poems.
This was a particularly interesting set because it appeared to offer views from
different stages of a writer attempting to rethink and reposition his practice
closer to where his interests lie than what is conventionally expected of him.
Plainly given my own history over the last few years this has resonance for me,
and it helped that I am more familiar with his work than with that of the other
readers on the night.My personal preference was for the poems from Captured Yes
because they appeared most thoroughly subjected to disruptive processes like
being cut-up and the furthest from personal/confessional poetry. This is not to
say that the poems from Travelator were not disjointed but that the way they
were read tended to smooth over any disjunctions. This is not something unique
to Steven I must stress, it is something I have noticed in some other readers,
and in a slightly different way was present in Rob Holloway's reading. I will
expand my thoughts on performance a little at the end of this review.I like
Steven's collaging of disparate elements from a variety of sources although for
my taste his use of pop culture references feels rather dated. I feel that
experimental musics and poetry on the whole have started to move beyond the
navel-gazing Romantic heroic/visionary fantasy of the artist as the centre of
their art that these references seem to conjure up. This may be a personal
idiosyncracy and didn't seriously impair my enjoyment of the reading. I did feel
that the reading was somewhat tentative and broken-up without that necessarily
being the intention.Steven's poems shift from the present tense to the past
tense or reflection, from specific observations or reported speech/text to more
abstract concerns, from simple language and quotidian detail to complex and
specialist language. There are nods to the conventional formal structures of
poetry - particularly in the form of sonnets that are in the contemporary
tradition of exploding and exploring the form and its meaning rather than the
historical tradition of inherited metrical and rhyme schemes. It will be very
interesting to see where he goes from here.

In mitigation, I have to say at the beginning I could hardly read some of the pages from Captured Yes. I made a mistake there; I'll not use the book again. But he also made some interesting remarks about performance itself which will make me think for the future, so much thanks for that:

My misgivings about Steven and Rob's performances are reflected by a wider
concern with performance that I've become increasingly aware of over the last
couple of years. I appreciate that many poets do not want to perform, that many
would even see it as inimical to their practice. There is the argument that
performance can give a spurious authority to the performer and narrow
understanding of the work. There is also what I would regard as the more serious
problem that performance can draw attention to the poet, that performance can be
used in the development of a persona, and that the persona becomes a block to
critical approaches to the work. Some poetry primarily exists on the page and
any performance would be a form of translation and perhaps remove important
elements of the original work.But while recognising this I believe that if poets
choose to perform, especially if they claim that performance is a part of their
practice or an element in how certain poems were written, then that should be
reflected in the performance. Performance is not just something that happens to
the poem, and the effects on the poem are not trivial or unimportant. For one it
is different from the poem on the page in that it is a unique iteration. Those
precise circumstances of space, people, time, and other environmental factors
will not be repeated. A live performance cannot be reworked and revised in the
same way that poems can prior to their appearance on the page. The page is a
space that looks more or less the same in any place or situation, and that can
be visited at times when it's most convenient for the reader. This means that
the performer is in a unique position to react moment by moment to the specific
circumstances of the reading. For me this ability to be responsive and the
ephemerality of performance are crucial, core differences between poetry on the
page and poetry readings.This is not to say that the performance needs to be
easy to understand, or that the poet should try to project a persona that the
audience will easily warm to. Any glance at the performing arts of the last
century should demonstrate that. But any writer considering performance should
think about what they want to achieve with their performance, how they want to
go about that, and what unique aspects of performance (duration, location,
acoustics) they want to reflect in what way, and how that relates to the poems
they will perform. Surely for someone who wants to perform with any sort of
regularity, or who finds that they are performing frequently, these should be
considered in the same way that words, meaning or non-meaning, arrangement on
the page and other elements of poetry are considered during the writing and
editing of pieces. I may return to this subject at greater length shortly.

The whole review can be found at: http://santiagosdeadwasp.blogspot.com/
Posted by Steven Waling at 11:05 AM No comments: 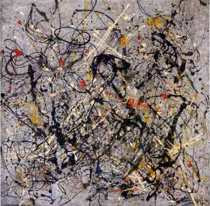 2. How can they tell it's not upside down?

3. Do you think he paints landscapes in his spare time?

5. The eyes kind of follow you around the room don't they?

6. The more you look into it, the more it looks into you.

7. I hear they've taught elephants in India to paint.