Since last time I was here, I've been on holiday, a writing holiday to the beautiful Isle of Arran, and I wrote 4 poems there. But I was thinking recently about improvisation (I've just written a review of the Manchester Jazz Festival for Jazzwise magazine.) How does it relate to poetry?

If you're writing a poem that fits a particular shape, say a sonnet, then improvisation is less important: like a piece of music, you have a particular shape that it fits into (sonata form, symphony, or the generic pop song.) But you still manipulate that shape, twist it into slightly different shapes, otherwise what you have is the same as everyone else. But if you break too far away from the basic shape, then it stops being recognisable as a sonnet, and becomes something else. That's where poetic improvisation comes in: the poem starts to develop a shape that the author isn't aware of before starting the writing.

It happens too with subject matter: if one sets out writing about one thing, one may end up writing about something wholly other. Ashbery's poems always seem to me to set off in one place and end up somewhere else, because he doesn't have a subject to start off with. He has an atmosphere, perhaps, a form of words. These lead somewhere but he's not strictly in control of it, he's let go of that control. Perhaps that's what improvisation in poetry: letting go of the controls and letting the poem lead the writer.

In Arran, I found myself writing a poem out of one of the workshops that didn't fit any shape at all. It was free-form, even open-form - even the left-hand margin wasn't sacrosanct. Then I cut a heart-shaped hole in the front page of the Observer's business page, and wrote down what was found there. I also used quotes from songs. The shape was arrived at, not because it was decided on beforehand, but because it felt right. There was no idea of what was going to be said even.

Later, the poem was revised to jazz music. Some things were changed, others stayed the same. Revision wasn't done with the idea of trying to make it tidier, but with the idea of making it truer to the moment of writing. It felt organic (Denise Levertov's essay on Organic Form comes to mind!) and I didn't feel entirely in control. Quite an exhilarating experience.
Posted by Steven Waling at 3:46 PM 1 comment: 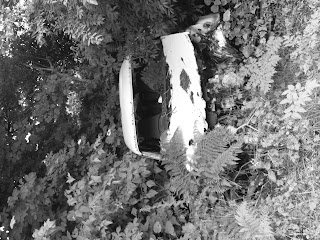 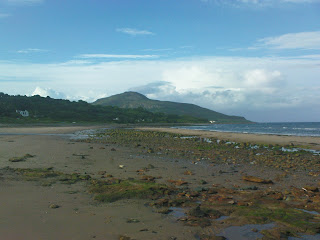 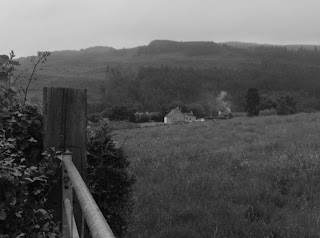 Some pictures from my recent trip to Arran.

Posted by Steven Waling at 10:35 AM No comments: