Just wanted to big up this, from Peter Riley, which is a pdf of 10 npublished poems by Nicholas Moore, a nearly forgotten poet of the '40's who stopped writing in the '50's and didn't start again until the late '60's:

They have something of the linguistic brio of Wallace Stephens, with a very English obsession with the detective story.

What Peter Riley has done to keep the memory of this poet alive is remarkable, and I applaud him for it. The '40's are a neglected era in British poetry, where there was a lot more experimentation and openness to ideas and influence from both America and Europe than the traumatised '50's poets would have us believe. Where Larkin closed up, poets like Nicholas Moore opened up.
Posted by Steven Waling at 3:33 PM 1 comment:

Make Perhaps This Out Sense Of Can You

Listening to the Bob Cobbing programme yesterday, I was struck by the question of how people actually find out about experimental writing. One of the advantages of a university education is that there is at least access to a reasonably good library; though they're not always as well-stocked as they should be. So there will be some: maybe some of the big names like Olson, for instance.

But a lot of experimental writing has been in underground, ephemeral, here-today-gone-tomorrow publications that were sold at readings in the back of pubs, and in a few select bookshops. Now those bookshops have mostly gone, there's a lot on the internet; but where do you even begin if you don't have a clue of what you're looking for? Bob Cobbing's Gestetner and all those cheap off-set machines have long gone, but there are still people producing lovely pamphlets to sell at readings.

Experimental writing is always going to be a minority interest perhaps; and that's not necessarily a bad thing. But I hope I'm not alone in wanting other people for whom it's all a bit strange to know more about it, so that they can have the choice. A constant diet of meat & two veg is not going to kill anyone; but there is so much more on the menu to try. Except you're not going to try what you've never heard of before.

So it's great that the BBC did a programme on Bob Cobbing: whose attitude to experiment was wonderfully refreshing: try and see!
Posted by Steven Waling at 11:40 AM 1 comment:

How valuable is it for a poet to have an education in creative writing/poetry/English?

I've somehow managed to go through most of my life without having acquired either an English degree or a degree in Creative Writing. This had something to do with an instinctive feeling that if I studied English I'd somehow not become a writer: fear of the inferiority complex perhaps. Was I right? Does a creative writing degree encourage poets to basically follow a roughly similar course or does it encourage experiment, accidental discoveries, individual paths, in between learning lots of theory, reading set texts and writing essays on semiotics and poetic theory?

It's the thing that worries me about young poets: are they being encouraged to find their own path, or are they being directed into the acceptable path? Could a poet as different as Geraldine Monk or Tom Raworth come out of a creative writing degree? I know some people who have done creative writing degrees and come out the other side as non-mainstream writers: Tom Jencks, Mat Dalby and Tony Trehy to name three; though Tony was probably there already. One doesn't arrange a festival in which the star readers are Ron Silliman and Geoff Huth without some prior knowledge.

I think there's enough of a breadth of poetry to say that the effect of all those creative writing courses hasn't been to make everything monotone, at least. As the Rialto young poets features showed, there's everything from fairly mainstream to non-mainstream: poetry has lots of balls in the air. But I still worry: if a teacher comes across a student who's literary tastes are very different from their own, how do they seek to engage with them? Do they try and fit square pegs into round holes, or do they look for the right shaped hole for that poet? And how do the students themselves feel about it?

My own experience of being a square peg in a round hole at various poetry groups makes me sensitive to this. I was recently described as 'eccentric' by one young performance poet. In terms of international modernism, I'm squarely in the middle of the pack; put me up against Ron Silliman or Bob Cobbing, I'm not even particularly experimental. Only in a nation that thinks Seamus Heaney and Philip Larkin are 'great' poets could I be described as 'eccentric.'

Here's an Edith Sitwell poem for you:

I've been remembering recently an early enthusiasm of mine for the extraordinary poet, Edith Sitwell, so I thought I'd share this poem, especially as it's Womens' Week this week, and I think that a lot of early modernist women writers are still not appreciated enough. I like her poems as much for their sounds as their meaning, though often, as in Colonel Fantock, for instance, there are memories and references to her awful upbringing. Even in this poem there is a sense of struggle between the demands of the heart and the demands of the mind. She was brought up to be an aristocratic lady, to be a silent 'support' for some rich man; but she was too clever and strange looking (she looked like a crane, as she herself saw.)

I don't know if she was a great poet, but like other women poets of a modernist bent, she deserves to be remembered. Gertrude Stein, Mina Loy, Lynette Roberts, Lorinne Neidecker and others are all on the 'neglected' list, and they're all worth revisiting.
Posted by Steven Waling at 4:02 PM 1 comment:

Do They Ever Revise? 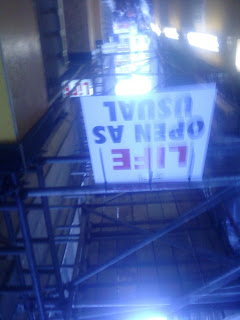 This interesting question apparently was scribbled on a submission note to the editor of The Rialto, Micheal Mackmin, in response to Nathan Hamilton's selection of around 50 young poets, all under 35, published in the last three issues. It brings up interesting questions about 'finish' in poetry.

In his second editorial for his selection, Mr Hamilton notes that there is a distinction between a poetry of 'product' and a poetry of 'process.' Product oriented poetry emphasises 'the relability of language in emulating or capturing, and then presenting, an external reality.' Process oriented poetry, on the other hand, is concerned with a way 'of speaking about the world that simultaneously presents the difficulties of doing so.'

One can see this in the choice of poems in the two issues: it swings from the juxtapositions, opaque language and verbal play of Keston Sutherland and Marcus Slease to the little slice of socially-engaged remembrance of Tom Warner. This could be described as a struggle between non-mainstream and mainstream; but I think it's more interesting than that over-simplistic binary suggests. Many of the poets in all three selections (the last ten are in the latest issue, 71) are actually better described as existing on a plain somewhere between the two.

But back to 'finish': and the question we started with. Suppose one were to put a landscape from the 18th century and a landscape by Cezanne, say, next to one another. Which one is more 'finished'? The 18th century landscape has an overall, smooth, finish: and the Cezanne looks more rough, more, dare I say it, 'unfinished.' In the earlier painting, the difficulties of seeing have been smoothed over beneath layer after layer of paint, until we get to something that looks like a landscape. Sure, it's constructed: that landscape, should you find it, wouldn't look exactly like how it does in the picture. But we 'know' what it's about; it's recognisably part of the world we live in.

The Cezanne, however, is more fragmented, more unfamiliar; we can recognise it's a landscape, but he's also incorporated an awareness of the difficulties of seeing that landscape. It looks incomplete, because we are being asked to complete the picture, to see it as if for the first time, in a new way.

That, I think, is something to do with the difference between 'product' and 'process' in contemporary poetry. Poems of 'process' may go through as many drafts as the average mainstream poem; but they don't serve to make the poem 'clearer', or to 'finish' the poem; they aim instead to emphasise that difficulty of seeing. Cezanne led on to Cubism, an even more disorienting way of seeing the world. To me, that's the way of the world: it's in constant flux, it's never finished, it never completes itself. It just carries on changing, moment by moment, and we, and our ways of seeing, are part of that flux.

I have to confess that I have enjoyed this series, and I congratulate the editor of The Rialto for his courage in encouraging this. What is also encouraging is that there are so many young poets who are engaged in these new ways of writing; not always at the far edge of it, but sometimes, as in the poems of Luke Kennard and Helen Phillipson (and the strange not-quite-hanging-togetherness of Emily Berry's poem in this issue) in the middle of this. They are, I think, less concerned with the old dividing line of mainstream vs. non-mainstream. And that, to my mind, is a good thing.
Posted by Steven Waling at 12:03 PM 4 comments: