Look Out: It's the Rialto Young Poets!

There's lots of young poets about. Suddenly, fresh young voices are jumping up out of the woodwork all over the place. Some of them sound a bit like what's gone before, others sound different. Voice Recognition, from Bloodaxe, was the first anthology to pick up on the young, along with City State: New London Poets, which confined itself to the capital. Both these anthologies are unusual in British anthologies in having both mainstream and more experimental voices swimming alongside each other, and the last two issues of The Rialto have continued this trend.

Nathan Hamilton, the guest editor of this section of the magazine, has been given about a third of the last two issues to publish these new voices; and he has, as they say round here, done a grand job. As with other collections of new poets, we have a plethora of new names to add to the mix, with a few familiar names. So we have Chris McCabe and Luke Kennard, Heather Philipson and Paul Batchelor; but we also have Ian Neames, the splendidly named Eileen Pun and Penny Boxall.

Hamilton's thesis is an interesting one: he sees the emergence of a generation of poets who are less bothered about the whole experimental/mainstream division. Some are producing interesting hybrid work, of whom he names Luke Kennard as the chief exponent. Kennard's narratives are often absurdist, funny and decidedly odd, often in prose (though here he's represented by two poems.) One can see this hybridism, though, even in a poet like Heather Phillipson: funny, and often with a philosophical edge, juxtaposing ideas but also making a kind of sense.

Some of the names I've read before include Emily Critchley, associated with the latest version of the Cambridge School but very much her own woman; and Amy De'ath, whose poem in issue 69 is, among other things, a feisty feminist declaration of intent:

I bit to chew and chewed down hard to make it known
That I am not here for smiling, coyness, shyness, or was it something
I had in mind grinning growling yakking making my
presence felt or manning up...

From Lena on the Beach
That this selection is deliberately so diverse feels like a real change in the air to me. For the first time maybe since the sixties, there seems to be a genuine movement to break down some of the barriers between poetries. A poet like Toby Martinez las Rivas, for instance, whose two long-lined, meditative poems are a highlight of issue 69, seems to owe as much to Geoffery Hill as to Barry MacSweeney. Todd Swift has tried to promote this hybridisation for some time now; and I think he may be onto something.

Even the poets who seem most comfortable within the mainstream style are perhaps less trying to ape the Armitage/Duffy style than to try to set out their own stalls. I'm quietly optimistic that this next generation will bring up many more surprises.
Posted by Steven Waling at 1:24 PM No comments:

It's been busy of late.

Last weekend, I went as a workshop leader to Hebden Bridge for the first Writeoutloud Big Weekend. We stayed in a hostel, there were about 40 odd of us, and the nights didn't end until after 1am each night. But apart from that, it was a wonderful experience for me when I led a couple of workshops on experimental writing and managed to coax some experimental writing out of people who probably haven't come across it before, let alone tried it. The whole weekend took me back to my roots among community writing groups.

I started by introducing the theme, and the various elements that might make up "experimental writing." It's an odd term: it makes the writing sound a bit like it ought to wear a white coat. But the people who came to the workshops were eager to learn and to participate.

It's one of the problems with "experimental" writers that sometimes there is an unwillingness to explain in reasonably simple language just what you're doing. Of course, all simple explanations falsify to some extent, they're bound to; but one can explain oneself in simple terms as long as one points out that this is a provisional statement of where one is now.

It's already created some reaction on the writeoutloud.net page, with one poet posting his "experiments" and getting a mixed reaction from readers. Mixed reactions are probably a good thing. Better than indifference, at least.

Tuesday night, I went to the reading at the Anthony Burgess Centre with Maggie O'Sullivan, Allen Fisher and Jerome Rothenburg, followed by the launch of the 3rd volume of Poems for the Millenium, covering Romantic and Post-Romantic Poetries. I really enjoyed the first set of readings, especially Maggie, who's work used to befuddle me no end. Which just goes to show that one should always have an open mind. Poetry you think is beyond you can grow on you, get under your skin; and I loved the way she used the sounds of language, the parts of words, as acts of communication in themselves: communicating, not a message, but a feel of a message.

Jerome Rothenburg was also wonderful, though his reading was interupted by my having to go to the loo. Still, I made up for it later by letting him know of a bunch of Lancashire dialect poets of the cotton famine he hadn't heard of... The readings from the anthology were eye-opening - a wonderfully funny extract from Clare's letters about city folk thinking every bird they hear at night must be a nightingale, some of the extracts from late Holderlin, some Issa haiku that seemed to largely involve pissing and frogs...

It was a beautiful reading, and afterwards we went to Cocotoo's underneath the railway arches, which had a replica of the Sistine Chapel Michelangelo on its ceiling...
Posted by Steven Waling at 2:15 PM 6 comments: 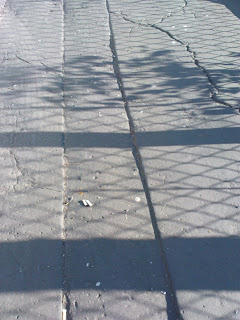 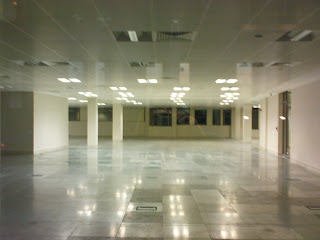 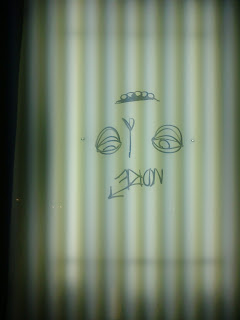 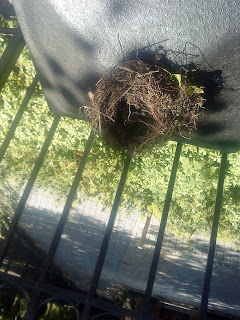 Posted by Steven Waling at 1:50 PM No comments:

It's been awhile since I've been here. I've been busy... not least becoming a performer in a band! Not, you understand, a singer - I would not inflict what passes for my singing voice on anyone in the public. But as a poet in a jazz/poetry combo called Backchat.

Which is kind of weird - everyone I know wanted to be in a band at some point in their lives, but most of course never got to be. Now, past the age of 50, I'm in a band. A jazz band. It's probably not the most innovative of jazz bands, but neither is it trad. A bit like my poetry - modernist, fragmentary and all that it might be; but I'm probably not at the absolute cutting edge of anything. I go to The Other Room and Counting Backwards, and I'm always inspired by what I hear/see; but I can only go in the directions that mean something to me.

Last Counting Backwards, by the way, was terrific, including a wonderful performance of the Bricks, by a woman going under the moniker, Sonic Pleasure. Also, Stephen Emmerson's poetry and the improve sax/whistle/recorder/swanney whistle of Philip Bent (I think). A wonderful evening, sometimes intense, sometimes quietly reflective. I'll never look at a pile of building materials the same way again...

What I liked about her performance were the twin aspects of temporariness and recycling. She was re-using materials in new ways, and as she performed, some of the bricks were crumbling as she banged or scrapped them together. A lot of modernist writing incorporates recycled material and found text, in my case, over- and mis- hearings. The modernist technique par excellance appears to be bricollage: you find it in Eliot, in Pound, Olson, Williams; and in contemporary writers such as Frances Presley or Tony Lopez. Even Elaine Randell's poems are using the material of others' lives in her almost case-note like poems.

Although it is how you put it together that makes the poems work, the fact that so much poetry is essentially found, fascinates me. Perhaps all poetry is found; where else would it come from? Poets recycle the world around them, but it's true in other art forms too. Be-Bop tunes are often based on older tunes, or quote them speed them up, add more notes. Collage and installation use found materials. Now there's the basis of a thesis. All art is about finding.

Feel free to use and rearrange any of these words in any order...
Posted by Steven Waling at 5:20 PM No comments: