I felt unaccountably sad on Thursday, when I found out that Edwin Morgan had died. I felt like I'd lost a kind of literary uncle: someone whose breadth and depth of vision, whose experimental nature and willingness to explore all kinds of poetry, from the sonnet to the sound poem, excited me when I first read him and still excites me now. He made me believe anything was possible with language.

So here is my most immediate attempt at, not an elegy, but at representing what he means to me. It's a poem made from words found in the brochure of the Royal Exchange theatre, words strangely capitalised in the paragraphs advertising the plays. As I was mucking around with the words on the back of the bus home, it occurred to me that it would be the kind of thing that he would do, and suddenly it came to seem apt to dedicate it to him:

I hope it's the kind of thing that Edwin Morgan, bricolouer, poet and experimenter, would approve of.
Posted by Steven Waling at 3:48 PM No comments:

The previous post really looked at some of the less well-known names in the anthology. People like Pete Brown and Spike Hawkins whose names only get remembered in passing these days. Pete Brown, of course, does have a second existence as a lyricist for Cream and a musician; but a lot of the names are now forgotten.

But there are poets in this anthology who could be classed as among some of the best British poets of the 20th century. Roy Fisher is here, for instance, with extracts from his very influential City, as is Gael Turnbull, Scottish-Candadian doctor and publisher of Migrant press and magazine, seminal British Modernist. Tom Pickard, Lee Harwood, Tom Raworth, David Challoner, Andrew Crozier are all easily among the best poets in the country, though here reresented by early work. Tom Pickard's combination of Black Mountain poetics and Newcastle dialect is only one of the many innovations here.

Then there are the British Beats. Jim Burns shines the brightest for me; I've always liked the seeming casuallness of his writing and the insight into everyday life his work gives. But I really must go and read some more of Micheal Horowitz, and his wife Frances. Not much could be said about Dave Cunliffe, unfortunately; though two of his contributions seemed to have the stink of real life about them, you could smell the patchouli again. Then there's Herbert Lomas, who may or not have been beat, but here seems remarkably sharp.

It's an interesting snapshot into interesting times, and a window into what might have been. What would English poetry be like if Larkin had been consigned to the margins and Roy Fisher had been the poet to imitate? Or if Gael Turnbull had been more widely spoken of than Heaney? I wonder...
Posted by Steven Waling at 1:52 PM 2 comments:

I bought a copy of this anthology, edited by Micheal Horovitz, in my local Oxfam shop, out of curiousity as much as anything. How does it stand up after all this time? And is it still important or relevant?

There is inevitably going to be some wastage after all this time, and the less successful poems are the ones that bear too much of the imprint of the '60's. Two lines from Tom Taylor's High Sequence encapsulate its worst faults: "Violence is a drag / it brings me down". The hippy egotism of those two lines and their blissed out insoucience almost seem like cliches nowadays. This one poem shows why it's not a good idea to write when high.

On the other hand, I have a soft spot for some of the short instant poems that were probably written on the cuff, like Pete Brown's Vision:

Not, I'm sure you'll agree, the most deep and meaningful verse ever penned, but it wasn't intended to be. This inclusion of humourous instant poetry gives the anthology a charm that is sometimes lacking in more serious collections of avant-garde poetry. Then there's David Kozubei's delightfully Milliganesque Tragedian's Speech:

I don't suppose such poetry was ever really intended to last or be important, and the fact that it got into one of the more significant anthologies of the '60's is a happy accident. But other poets also have a kind of instancy about them that reminds me of Frank O'Hara and the poets of the Lower East Side who were operating at the same time. Poets such as Paul Evans, Pete Brown and Spike Hawkins, with a touch of that English strain of surrealism that descends from Lewis Carroll:

There's a mixture of sharp observation and odd juxtaposition that is very English, as well as being part American. If this is influenced by Blake, it's by the poet of Innocence & Experience, not the poet of the prophetic books.

Blake does cast a shadow over the whole anthology, not just because of the cover, but because of the Afterword, which also invokes the Beats; but it's actually surprising how few of the poets here are actually Beats. The best poets in the book; people such as Gael Turnbull, Roy Fisher, Lee Harwood, Harry Guest and others; seem to me to be more interested in Black Mountain poetries, New York School poetries and the Objectivists. The worst poems seem like parodies of the Beats. Micheal Horowitz' own poems stand up, as do Jim Burns'; but the poems in praise of hash or about jazz music fail to do much more than be damp squibs.

So is it still an important anthology? Well, yes and no. There is still a stuffiness in the poetry that needs fresh air blowing through it. When Robin Robertson can declare with all seriousness that there are too many poetry books being published, there is still a need for the constant revolution of underground poetry. It's also good to become more aware of the various paths that poetry has taken in this country apart from the official line that leads from the Movement to Carol Ann Duffy. There is much beauty in this book, much joy, and an openness to experience, to the world outside the academy.

On the other hand, it does have its faults. The lack of women poets for one. The lack of rigour in some of the poetry is also regretable, though all anthologies contain duds. Not all the poetry here is particularly avant garde; Herbert Lomas, for instance, though I like his poems here, doesn't strike me as particularly underground. Non-mainstream poetry has moved on too, and there are ommissions from the time: no Jeff Nuttall, Eric Mottram, Bob Cobbing or JH Prynne for instance.

On the whole, I like this anthology. There are parts of it which are very sixties, but it survives the blissed-out hipness and I recommend it to anyone who enjoys a trip to the past.
Posted by Steven Waling at 2:26 PM No comments: 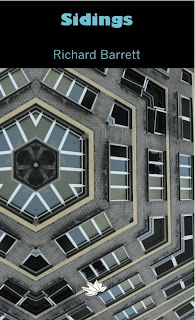 Richard Barrett's first book is a dinky little thing you could easily fit into your pocket, but contained within are some of the most interesting words to have come out of a young Manchester poet in many a year. It's a pretty adventurous ride through the urban environment from a poet who is aware of the world around him, worries about the economy, works in an office and observes the media-saturated, channel-hopping world we all live in with a mixture of wry humour and a kind of undecieved romanticism.

The book starts with "Reason For Not Writing Poetry", a bold statement considering its possible commentary on what follows; but soon we're bang-slap into the urban environment, with references to architecture, to the consequence of the current lack of coherent policy on social housing. Throughout this collection, politics keeps rearing its head, in sequences such as the rushes and The Hard Shoulder. But this is never an agit-prop anti-capitalist rant; politics is seen here as being as much a part of life as falling in love or going to work. Throughout this collection, we feel Barrett's confusion and anger about the banking crisis, about what's going on with the language around him:

Asked to resign. Meaning
confused. That's sacked.
No hastily typed letter on
the boss's desk.
No assessing the menu for
the cheapest items. Leaving
- hint of a way back -
(to be expected).
CEO states:
at time of mortgage application /
facts were accurate.
Are we supposed to have
that short a memory?
Not idiots. We. Are. Not idiots.

His technique of rapid jump-cuts from the personal to the political, from the external to the internal and from his own thoughts to what's overheard suits these poems well. To use a phrase from his almost-manifesto, We Dig Repetition, he's trying to keep pace with mind.

Anyone with an interest in contempory poetry should be buying this collection.
Posted by Steven Waling at 2:07 PM 1 comment:

What's the difference between "the pusuit of mere novelty" and that Poundian injunction to "make it new?"

It's an interesting question, isn't it? Does it have something to do with your own approach to newness? What about gimmickry? Do you use gimmicks in poetry, or are you being "authentic" in reflecting your experience of the world through new techniques? Does the parsing of the verb "to make new" go something like this:


"I am making it new

You are pursuing mere novely.

They are using gimmicks."

All poets, whatever their critical allegiances, have a troubled relationship with the 'tradition.' With all those dead poets breathing over our shoulders (or rather, not breathing...) it's a wonder we ever get any work done... Even innovative poets are often working in areas that have been explored before: flarf is another form of found poetry, viso-poets are exploring areas that have been explored by other poets etc - but they are being pursued in new contexts or with a different approach. There is nothing new under the sun, as the preacher said, yet every day is a new day: we've both been here before and never been here before ever.

What is a gimmick in poetry? Is a sonnet a "gimmick" that just has the dubious virtue of having been around for a long time? Open form has been around since the early poems of Charles Olson: has it now ceased to become a gimmick and become an accepted form of writing now sixty years have passed?

The difference between novely and newness seems to be more to do with the critic's own ideology and less to do with critical acumen. How can you tell that something is going to last? I don't think you can.
Posted by Steven Waling at 4:16 PM No comments: